According to Wikipedia, a moment lasts around 90 seconds. Microsoft, on the other hand, has an entirely different definition. Around 20 minutes.

I’ve used Libre Office for several years at home, Open Office for years before that. The former comes with Ubuntu and other Linux distributions. It’s free and it’s very capable.

However, an offer via work led me to purchase Microsoft’s offering for only a tenner. While this remains much more expensive than Libre Office, I was tempted by the price.

Unfortunately, it didn’t actually take a moment to install. 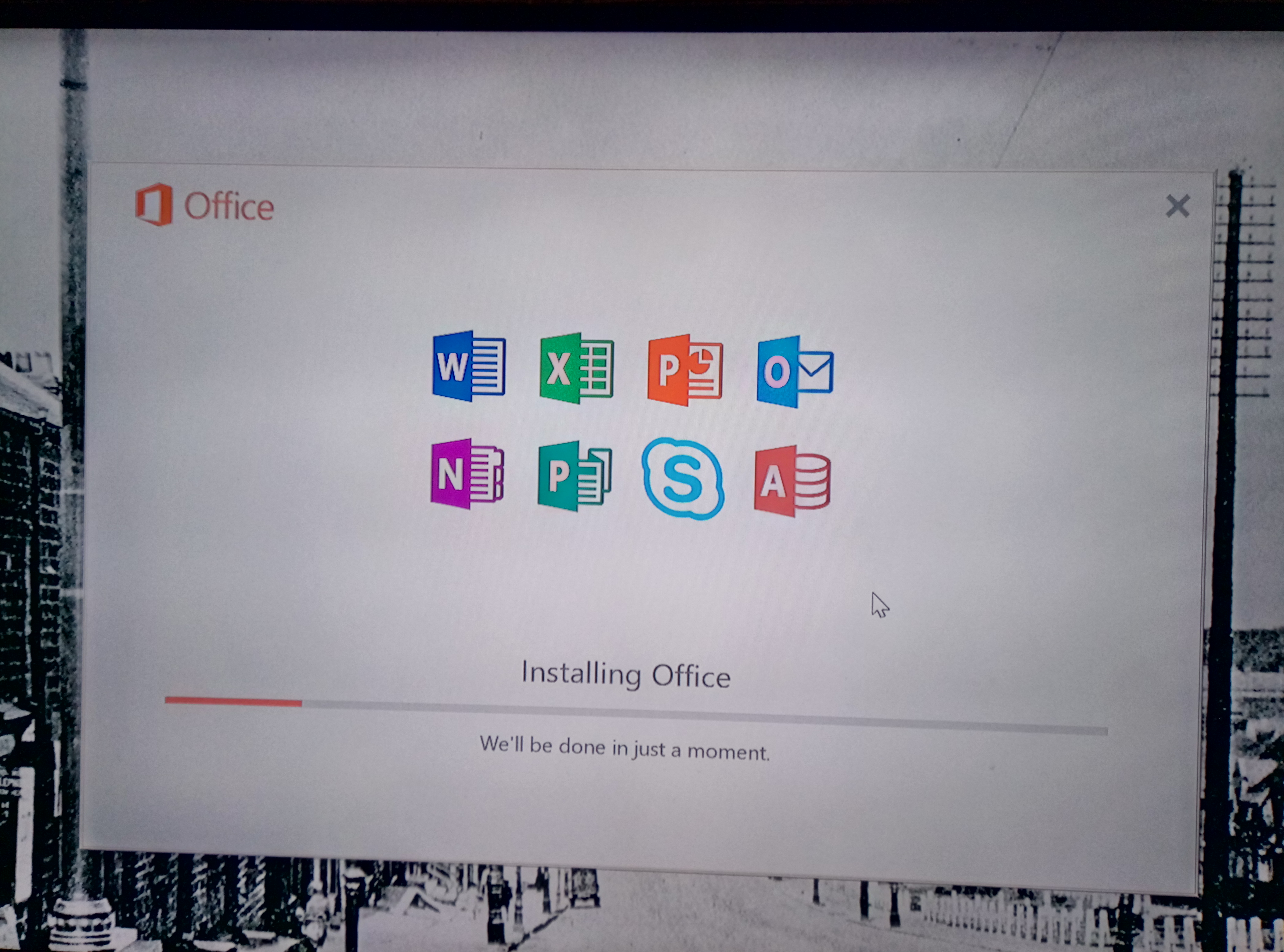 I think that in a bit may have been more appropriate a message during installation.

You’ll have noticed that I seldom mention work here. However, I shall now briefly do so. Various IT releases (for example 1.5 and 403, or 4.03) have recently dominated my working life and I’ve realised that I should adopt a more formal project approach to my home life.

I’m thinking specifically of the shed. While obviously not an IT project, a release approach may enhance the organisation of the work going forward.

So, thinking retrospectively, my shed project has to date progressed as follows:

I may shortly produce a Gantt chart.

Appearances can very much be deceiving. I’d noticed the Hop, but from a distance it looked nasty; all glass and neon. But the barman in the Cap and Collar told me I’d get a nice beer and something to eat there.

I also had a conversation with said barman about how the bar (the Cap and Collar) resembled one in Town. He asked whether I was referring to the Split Chimp. To say I was surprised is something of an understatement. It transpired that he’d never been in the Split Chimp, but had heard of it because it was the first micropub in Newcastle. It’s funny how word gets around.

Anyway, I’m now in the Hop with a very nice pizza. Thoughts of a fourth beer are quickly fading.

I generally try to avoid staying overnight for work, but there wasn’t a lot of choice today. Without the company of colleagues. In Shipley.

And that pretty much sums it up. I’m seriously unimpressed with Shipley. No, that’s a little strong. I’ve been here a few times, but haven’t needed to stay over before. It’s a nice enough place in daylight; the canal’s quite pretty and there are some really nice Victorian buildings.

But, after a shower, I decided on a beer before finding somewhere to eat (nothing vegan in the hotel). I wandered into the House that is a home (it might not really be called that, I didn’t stay long enough to take note). A lovely old building, it was horrible inside.

So I walked to Saltaire. Where I stumbled across the Cap and Collar, a craft beer bar. It’s small, but the barman understood my request for unfined beer. And I’d barely sat down with a pint when Elbow’s one day like this  was played on the radio. The place resembles the Box Social in Town too, so I’m feeling quite at home.

I spotted another couple of decent looking pubs on my walk; there’s one next door. Which means I can have another beer or two on my way back to Shipley.

Several years ago, I called into the Old Dog, in Preston. It was a bit of a dump, but I didn’t intend to stay for more than one drink.

I may have written about this at the time, but the landlord (who was still in his 20s) engaged me in conversation. We mostly talked about music, finding that we only had Rufus Wainwright in common. Or was it Devendra Banhart?

Anyway, on learning this, the friendly landlord went upstairs to his flat, returned with a Rufus Wainwright (or was it Devendra Banhart) album, turned the jukebox (which was playing at the time), removed a CD and inserted the Rufus Wainwright (or …). He then played the whole thing and gave me more beer, for which he wouldn’t accept payment.

Fortunately, my sensible head prevented me staying until closing time.

I suspect that the pub has since changed hands a few times. I do have a point though. The Blue Bell, as I learned earlier this evening, had replaced a demolished Old Dog. So, at some point in the late 1800s, a new Old Dog must have been built.

After a bite to eat this evening, I walked in the direction of the hotel. And then turned around And walked in the opposite direction. I had coke with the meal, so thought a walk to the Blue Bell was in order. 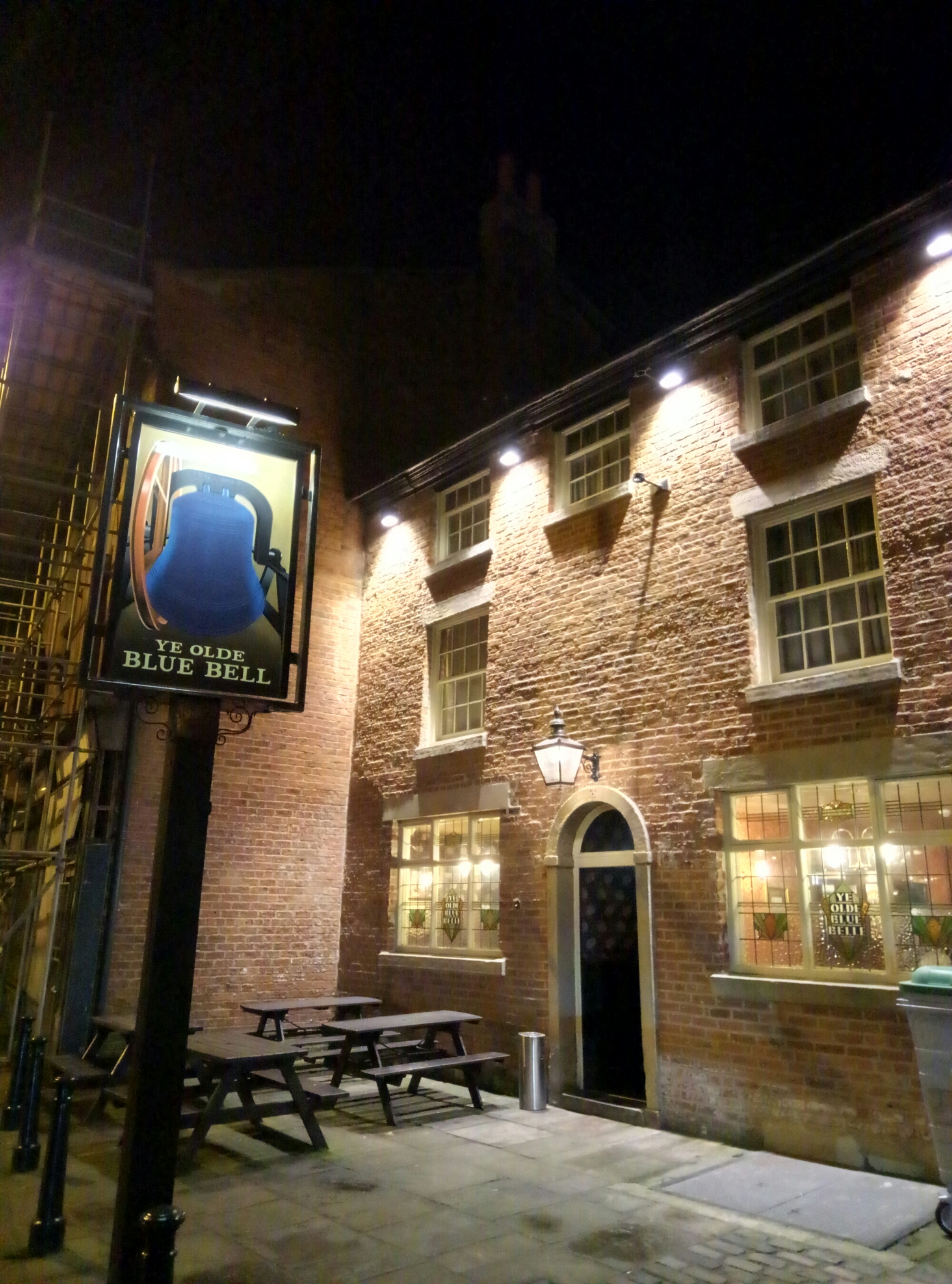 I only had a pint of stout, since I need to be coherent at work in the morning, but it would have been wrong not to take the opportunity to visit a Sam Smith’s pub. And I’m quite fond of this particular pub.

While there, I learned more of its history. It opened in the early 1700s, on the site of the Old Dog. There have been two related murders, the first a landlord’s daughter the the mid-1800s, the second more recently in 1944.

The landlord’s daughter wasn’t actually murdered in the pub; the act was committed in a nearby pub, over a glass of lemonade. By her fiance en route to their wedding. He cut her throat with a razor.

It didn’t end too well for the fiance either; he was hanged, with a 9ft drop, in Manchester. The latter murder did occur in the pub though. An American servicemen had made comments about British forces. And a British soldier wasn’t impressed and stabbed him. The latter was court martialled, but his fate wasn’t stated. I may need to carry out further research.

It was an educational pint of stout.

My second in command has exchanged chef’s whites for a different form of dress. 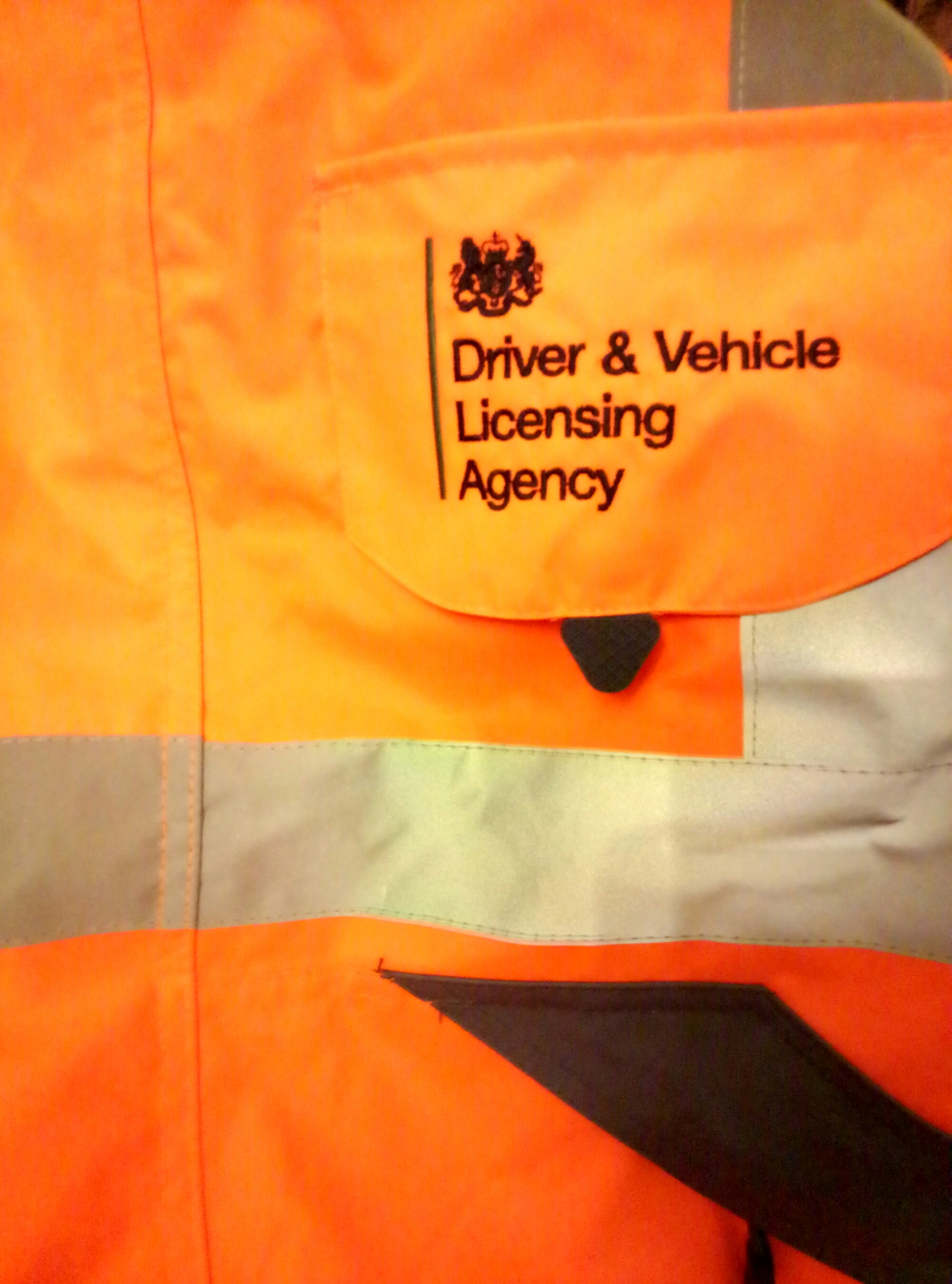 Luckily, she looks good in orange.

I took a half day today because an old boss of mine is retiring and is doing a sort of a farewell tour. She (her name’s Helen) was the best boss I’ve ever had.

She won’t ever read this, so I could say anything I like, about her being rubbish, and she’d never know. But she wasn’t rubbish and is genuinely the best manager I’ve had. And she’s a lovely person, with a pretty decent taste in music too.

What more could anyone want from a boss?

I’m annoyed with myself. I’m now on my way to work for the second time. My first attempt was aborted when, halfway there, I realised I’d forgotten my bag.

I could have managed without my notebook and laptop at a push, but the prospect of starvation (I can’t buy a vegan sandwich at work) forced me to return home.

I’m going to be ridiculously late for a busy day.

My second in command has used her staff discount for the first time. And she did well. 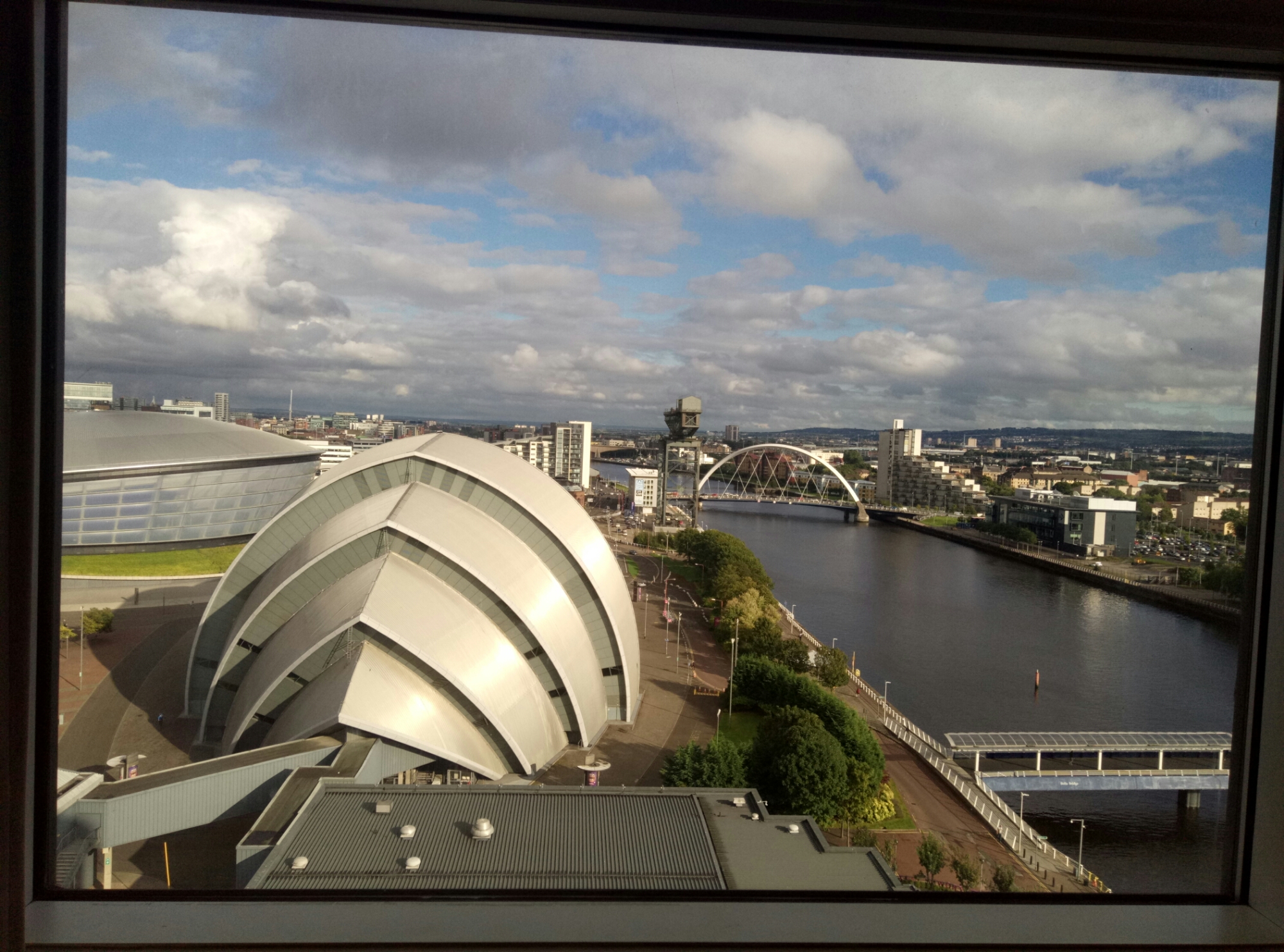 A room with a view. Half price at the bar too.