A few weeks ago, while out on a bike ride, my second in command and I came across an unusual bike outside a bar.

It was roughly the size of our Bromptons, with a similar design. However the frame was built from multiple thin tubes, rather than the standard chunky tubes of our (and most other) bikes.

Last night, while half watching something on TV, an old clip from the 60s caught my eye. A very Brompton-like bike was being hailed as having a revolutionary design. Up until that point, I’d never heard of Moulton bikes, so I looked them up.

Their evolution has now resulted in this. 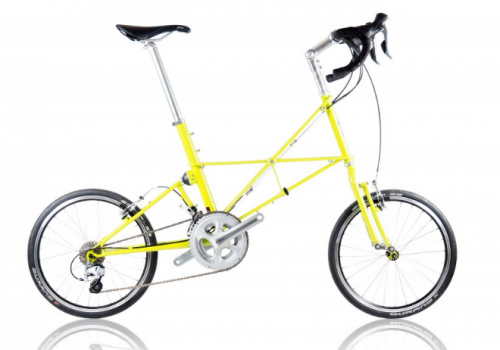 Which, apart from the colour, is pretty much the bike we saw a few weeks ago. The design’s a lot more advanced than our Bromptons’, but they’re a little more expensive. They don’t fold, the main reason for our Brampton purchase, but they’re reputabley light and fast.

I suspect I wouldn’t be allowed to buy one.