Went on a micropub pub crawl in Teesside yesterday.

I don’t actually remember how many micropubs we visited, in Hartlepool, Middlesbrough and Stockton.

The day didn’t start too well, with some pubs poorly stocked. I’m not being critical; it’s understandable that small businesses are wary of taking risks such as stocking up with products (cask ale) with a short shelf life.

But the day ended well, with revisited pubs and new discoveries.

Some of our group did miss the last train home though.

Me and the hound had a day off today.

The sky may have looked very blue, but it was a pretty cold day.

This is quite possibly the nicest beer ever.

Several years ago, a mate and I set off on an adventure to Holland. A festival in Holland. Arriving in Calais, we decided to buy cheap beer rather than pay Dutch prices.

This involved a lengthy wait for a wine warehouse to open, since we’d arrived at a ridiculously early hour. Which meant we were pretty tired by the time a warehouse opened.

The choice of wine was impressive. Unfortunately, we couldn’t take glass bottles to the festival and only one brand of beer was on sale for a sensible price.

And that brand was Wanka. It was incredibly cheap and only a month or two out of date. Concerned about our schedule and the possibility of illness due to outdated beer, we left the Wanka beer and continued on our way.

We ended up buying overpriced beer from a Lidl in Belgium, shortly before entering Holland. During our time at the festival, we often talked about Wanka beer, wondering whether we could have avoided the medical tent had we purchased out of date beer.

We did have a great time at the festival, despite having to drink overpriced beer.

Tonight, while in our local corner shop, I spotted some cans of Wanka beer. Except it wasn’t. After telling many people over the years about the Wanka near miss, I now realise that tiredness had led to us mis-reading the can lettering in Calais.

So there’s no such thing as Wanka beer.

This week and last, I painted a pub. And, you know what, I managed to do a decent job. The place looks like a pub, rather than a pub pretending to be a cafe. A little more work is needed to get it right, and I neglected to take a picture at the end of last night’s decorating shift, but it’s pretty much there now. Anyway, I’m now in a pub other than our pub. And it’s nice. And I can have a pint without thinking I might need to nip behind the bar if it gets busy. The guy who’s singing here has also played in our pub. He’s ridiculously good.
Well, I’ve now officially started some Christmas shopping. Like I used to do years ago, I opted for the hell that is the Metrocentre, with the aim of picking up most things in one go. Naturally, that hasn’t happened and a return trip will be needed. Anyway, to ease the pain, I’m currently with a pint in Wetherspoons, before returning home. Which I would generally do years ago, too. More recently, though, I’d have a quick pint afterwards working in the van, which is a convenient ten minutes’ walk from here. While that would have been through August, and maybe a couple of days in early September, it feels like a matter of days, rather than months. Apart from the drop in temperature, of course. I should probably call-in to check the van, but the last couple of nights’ working in the pub have taken their toll and I feel really sleepy. After working through the night, I’ve found it difficult to sleep during the day. Still, my labour is starting to pay off. And, apart from a couple of small finishing touches, the accommodation above the pub has worked out well. I’m pretty happy with the end result, particularly since we have our first bookings.

After being home a few days, I’m catching-up with things. Last Friday, which already feels like a lifetime ago, we visited this year’s beer festival in Peterborough. It’s allegedly the second largest in the country and entry is free for CAMRA members. Fortunately, my beloved and I are members.

Unfortunately, we’d left our membership cards at home. We’d not actually realised that we’d be in Peterborough during the beer festival. I was made aware on my arrival from London, where I bumped into my beloved’s niece (who asked whether we were there for the festival).

Luckily, a very nice man escorted us through the CAMRA members’ entrance at minimal cost. Well, we really are members. It’d been some time since we’d been to this festival and it seemed larger than on that last occasion. There was certainly a huge range of beer and it was great to see many labelled as unfined or hazy. Usually, I find four or five fishless beers at a beer festival, but there were so many on this occasion that I was only able to work my way through a small proportion of fish-free beer. I’d definitely recommend checking this beer festival out.

In the Ostrich. In Peterborough. A truly great bar.

On discovering a tap takeover in a bar in town, I mailed the brewery to question whether their beer contains fish bits.

I didn’t expect a response until next week, so this was very much forward thinking, but they replied straight away. On a Saturday evening.

Anyway …
We don’t use isinglass in any of our beers so they are all vegetarian friendly. Hopefully you enjoy them!

So I obviously had to go back to try one. 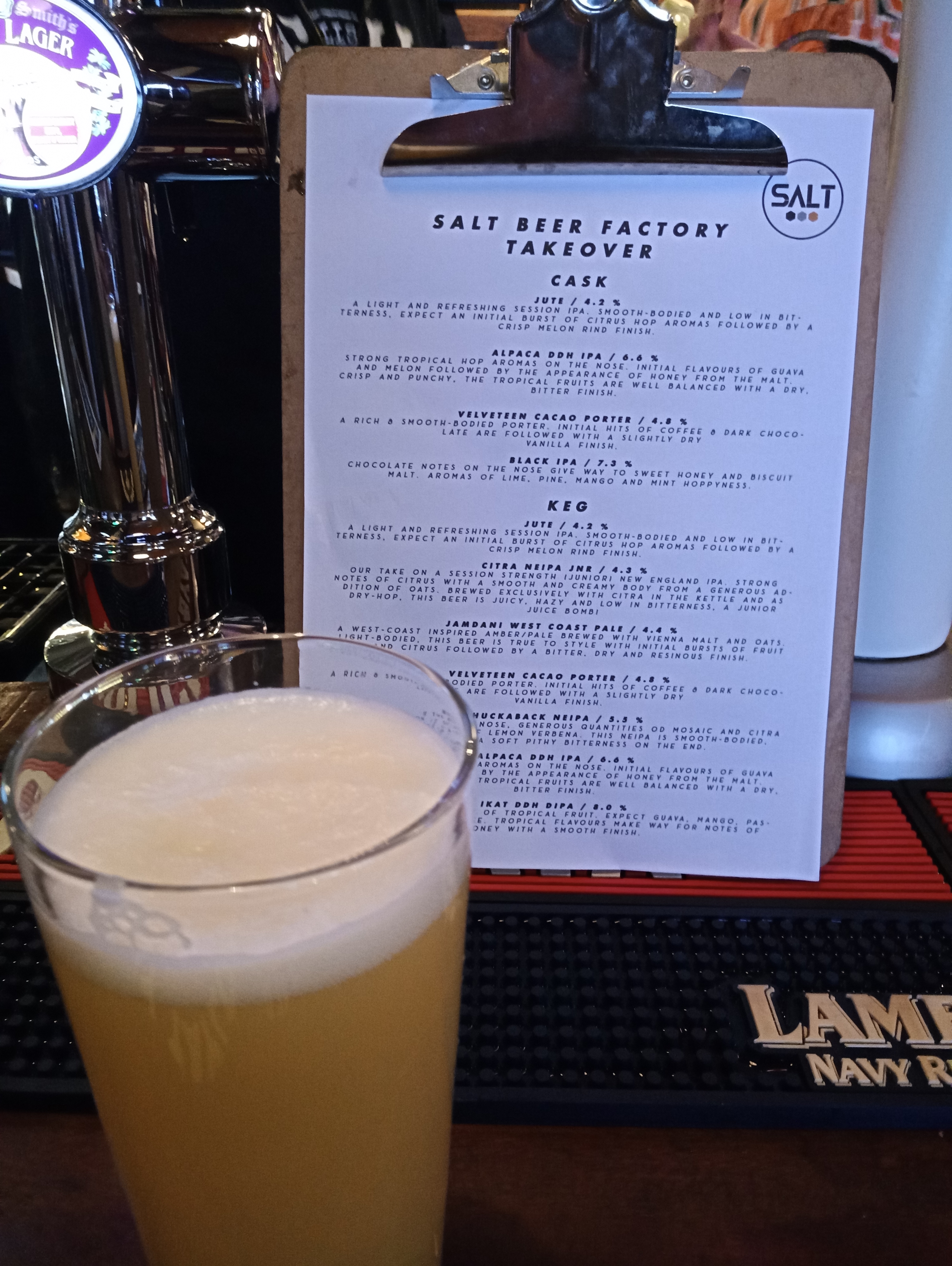 And it was gorgeous. They’re based in Saltaire, which is also gorgeous, so I shall make the effort to visit their premises.