Around three weeks ago, I picked up a virus; mostly nausea, fever and a bit of a cough. I didn’t (couldn’t) eat for a week, which left me a little feeble and wobbly afterwards.

Unfortunately, the virus (I’m assuming it’s the same, or a variant of) returned a few days ago. Thankfully, with only minor nausea. I’ve presumed that this is the Coronavirus and that, when well, I’ll be immune and safe to go about my business again. I mean, one would be extremely unlucky to be so unwell and not actually had the virus.

I’d planned on a day off today, but did have a couple of things to do in the pub first (till stuff and cleaning surfaces). So I walked to work, did what I needed to do, then took a slow walk home. Because the weather was so nice, I walked over to Newcastle and wandered through Ouseburn.

The place was eerily quiet, with very few people running or cycling, although the city centre was still busy-ish. Not that I can criticise others, since I was out too. In my defence, this is my first walk, other than strictly for work, in three weeks.

Anyway, some pictures of places usually teeming with people on a sunny afternoon.

It’s a little tough in the pub business right now.

Well, the choice was taken out of our hands. The Schooner will close tonight.

We’ll be back as soon as we can. Meanwhile, I need to drink all of the cask ale before it goes off.

Well, I didn’t expect the pub trade to be easy. We came in at a bad time. We did know that buying-in to a summer pub in the autumn probably wasn’t the best idea, but we also knew that we only needed to get through the winter, before business would pick up.

The winter was probably harder than we’d expected, but we did get through it. But now, there’s Coronavirus. At first, the impact on business was slow, with no change in business. This week began with a busier than usual Monday and Tuesday, following a pretty decent week. But, then, Wednesday happened. The pub was empty during the day, with just a handful of customers coming to eat. The teatime regulars were there as usual, but daytime trade just dropped right off. Yesterday, usually a busy day, was the same. I wasn’t there last night, but the signs of a really poor night were there.

We’re now approaching the weekend; actually, Friday is usually a good extension of the weekend. If business continues at this rate, and the weekend is a failure, we’re really going to struggle and some hard decisions are going to have to be made.

The Government have announced grants, and we will qualify for one, but there’s no information as to how these can be claimed. Apparently, this is coming next week. However, with the assumption that any money would come through mid-April, that leaves a pretty big gap if we’re losing money every day and still need to pay staff and buy stock.

Right now, there’s not a lot we can do. Let’s see how the weekend goes.

Don’t. Don’t have a root canal filling. I’ve had two, with the same outcome. Pain.

The trouble is that the tooth is dead after a root canal filling. It becomes brittle and can’t last forever.

Just over a year ago, December ’18, I experienced a failed attempt to remove a root canal filled tooth. It was pretty horrible, with two dentists trying to remove the tooth, which had broken into pieces. This resulted in extreme pain over the next few days; relieved only by a cocktail of pills and alcohol.

Several months later, the remnants of the tooth were removed at the dental hospital. Surgery was involved.

Today, after a peanut break, my second root canal filled tooth was extracted. The experience wasn’t great. But, while there is pain, fewer painkillers have been needed.

Tooth removal on a good day is brutal. I’d describe my recent experiences as nothing short of barbaric.

This is a glass of Sherry, in a whisky glass.

We have no Sherry glasses. This is because I’ve not tasted Sherry since the age of nine. Yes, nine.

I’ve had asthma as long as I can remember and, when I was a kid, medication was pretty much non-existant. My own treatment mostly consisted of tranquelisers, with the aim of preventing me from exerting myself, thus triggering an attack. There were some pills in the event of an asthma attack, but they were ineffective.

Now this is weird, since inhalers were available. Che Guevara used French inhalers, which I assume we’re something like the current mainstream reliever. Of course, these weren’t readily available in Bolivia, resulting in the inevitable attack, delay and capture (the rest is history).

In the UK, I can’t say why Ventolin (I’ll use the brand name) also wasn’t available in the UK all those years ago. Maybe the drug was accessible then, but it was never offered to me. Or maybe it wasn’t available on the NHS.

Anyway, my parents heard that Sherry was beneficial for asthma sufferers. We’re not talking about keeping kids quiet by getting them drunk; rather, a small glass each evening to relax the patient.

My first glass of Sherry would have been at the age of eight. It tasted vile and it took a lot of encouragement to make me drink it. However, after a few weeks, it began to taste nice.

A few weeks ago, I bought a bottle from Tesco. It was labeled Jerez Xeres, so I knew that meant it didn’t contain fish (or other animal) bits. It sat in the wine rack since.

For some reason, I decided to try some this evening (why would it work? .

And it was (is) truly disgusting. I think I’ll stick with my inhaler.

I haven’t felt very well the past couple of days. I mislaid an inhaler the other day, so I had to resort to an almost dead device.

Which didn’t work very well, leaving me struggling a little.

But, in my local, I was able to acquire a new inhaler. OK, so it’s of the stubby variety, but it worked straight away. 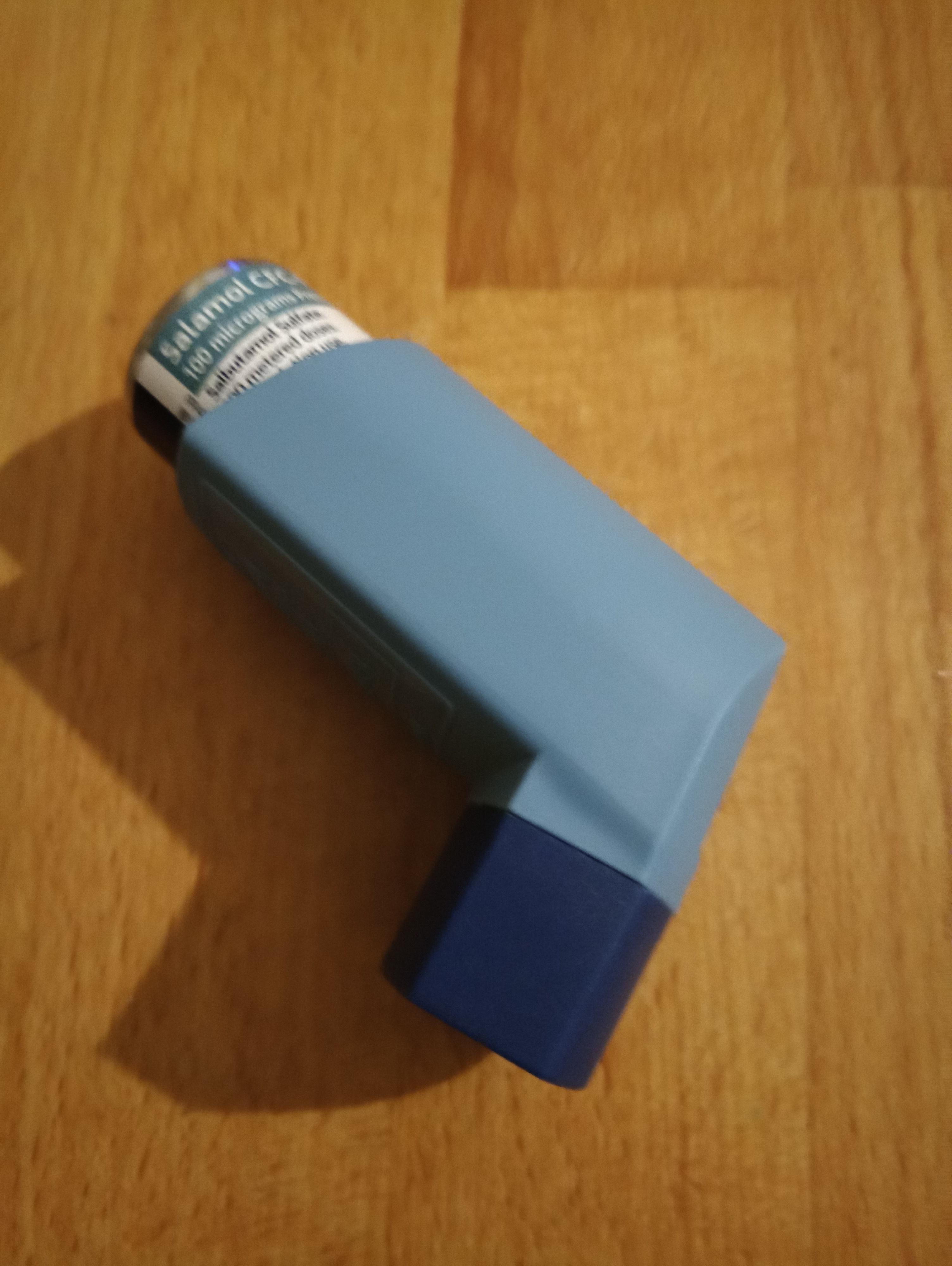 And, for the first time in a couple of days, I can breath normally again.

A quick tooth update. The dental surgeon told me it’d hurt yesterday. It didn’t. Well, not too much.

It didn’t hurt most of today either. Well, not too much.

Hurts like fuck now though. So it’s back to pills and alcohol.

After four months, I had the remainder of my tooth removed this afternoon. Apparently, I was lucky, in that the remaining root had moved a little since December’s only partially successful extraction attempt.

Today’s experience at the dental hospital (my second visit of the week) was certainly better than December’s epic session in the dentist’s chair. It was all over and done with in less than half the time.

It was never going to to be a good experience, but the staff were great and I’d certainly be less apprehensive should I ever need the dental hospital’s services again.

I’m hoping there’ll be less pain this time. However, I have Codeine, Ibuprofen, Paracetamol and Gin on hand, as a precaution.

The latter will be happening anyway, since I’m assuming it’ll aid the dissolving of stitches.

What benefits could be derived from an aggressive, partially unsuccessful, tooth extraction, you may ask.

Well, I’m now wearing a pair of jeans I’ve not been able to fasten for a very long time.

So flares* might not exactly be fashionable right now, but the important thing is that the jeans fit once more.

There’s another benefit too. Yes, really. I’ve now scientifically proven that excessive beer consumption does not in fact result in a proportionate increase in the size of a man’s midriff. The reduction in my own middle area appears solely to be the result of my two week diet of soup.

While I recognise that a continued soup diet would enable me to maintain my new physique, I fear that this pair of jeans will soon return to the wardrobe.